Preview ahead of a Spring Live Auction at the Saffronart Gallery in Mumbai
Image: Punit Paranjpe / AFP

The idea of a global pandemic driving purchases of fine art may sound absurd, but that is exactly what occurred during the lockdown. Dinesh Vazirani, CEO and co-founder of Saffronart, an international auction house with nearly five hundred auctions to its credit, chalks it down to the fact that people were more involved in their living spaces and collectors had more time to focus on what to add to their repertoire, given that art is a highly involved purchase.

Besides collectors, many new buyers, those with new tech money and a disposable income, too came into the market. Indian Art Investor, an independent market intelligence firm focussed on Indian Art, in a private art market survey that included 158 galleries in 2021, found that among the new buyers there has also been an increase in the number of women buying art.

Curiosity and the desire to explore art as an investment, as well as technology, have helped grow and give this creative industry a boost. “We have seen a significant growth in new buyers in recent years who have expressed an interest in purchasing art across various categories. These are buyers who are comfortable with buying art online and are, therefore, not limited by geographical spaces,” says Vazirani. “We’ve also seen the presence of more mature collectors than speculators in the market in recent years.”

There have been significant developments in the Indian art market over the last two decades and the market is only expected to grow. Experts point out that for buyers, it helps to know the trends in the market as well as to keep some basic indicators in mind when investing in an artwork.

There has been a significant movement in the Indian art auction market in recent times. Venetia Vickers, head-financial knowledge, Indian Art Investor, points out that in 2001-2002, the total turnover generated was around ₹7 crore against 231 works that were sold at auction. Ten years later, that number went up to ₹271 crore against 1,100 works sold while in 2021-22, the turnover has jumped to ₹1025.6 crore against 3,617 works.

“There’s been a huge decade-on-decade jump that has happened,” she says. “But the pandemic is actually what has brought about a massive change in the trajectory of the Indian art market, especially at auction.”

Vazirani adds that they conducted three times the number of auctions between April 2020 and April 2021, as compared to the preceding year. “Additionally, the number of lots (an item or group of items offered at auction for sale as a single unit) sold in 2020 was nearly double the number sold in 2019,” he says.

At auction, the demand for Indian art continues to remain high. Tyeb Mehta’s ‘Untitled (Bull on Rickshaw)’, 1999, was the most expensive work to sell in a Saffronart auction this year. “The work sold for ₹41.97 crore ($5.6 million) and is the highest price achieved by the artist in auction as well as the second-most expensive work of Indian art sold globally,” says Vazirani. In March 2022, Sotheby’s Modern and Contemporary South Asian Art sale in New York demonstrated a consistently healthy demand for this category, with a sell-through rate of 94.5 percent, 70 percent of these works selling for over the high estimate, and a sale total that doubled the low estimate to achieve $9.5million (est. $4.6–$6.7 million).

The Indian art market is just one of many spaces getting prospective collectors excited about investing in art. However, there are key indicators to keep in mind before you make a bid.

Vickers says art as an investment should be a secondary concern and it is important to choose something you will enjoy living with. “You should first find that artwork appealing, you should be able to connect with it emotionally,” she says.

It helps to take in as much art as possible to get a feel of what one is drawn towards, as well as learn about it from experts. Data-backed decision-making can give a better chance of choosing investment pieces wisely and at the right time.

“Browse auction catalogues–these works have typically been researched, vetted, and evaluated in terms of market pricing. Much of the effort required is done by the auction house and can be a great way to research, learn, and potentially buy,” says Vazirani.

Once you have identified what you would like to buy, it is time to do a little digging into the artist’s life, journey, influences, and artistic phases, says Vickers. “Study the performance of that artist for the last five to eight years, if not more, to see where the movement is, whether it’s on the rise, and how his/her average prices are going,” she adds.

Looking at the medium and material being used in an artist’s work is also important. An artist may be really famous, but in his/her repertoire of work, only one style of art could be doing well. This is where many people make a mistake in getting stuck with pieces that may not end up having any monetary value, say experts.

The collection should also be a mixed portfolio. “At least 50 to 60 percent should be modernist and maybe 15 to 20 percent can be pre-modernist [artists], who have already established themselves,” says Vickers.

While they rule the roost when it comes to Indian art, experts are also seeing a higher number of works, lower priced works, by contemporary artists, that are being traded at auction than before.

“The last financial year witnessed the introduction of a large number of contemporary and female artists into the mix as well as allowed for acrylic, mixed media and board to not just find their place but also do well at auction,” says Vickers. “Last year, works on board saw a jump of over 50 percent in terms of turnover at auction.”

One can take a look at contemporary artists once the portfolio has the basics of established artists in place. Though one must keep in mind that it is a risk since the future value of their works can be unpredictable. “The thing with emerging artists is that they are here today, but you don’t know where they are going tomorrow,” says Vickers.

And experts say that while one shouldn’t be afraid to stretch for a good artwork, one must keep in mind what determines its value. “This includes the history of the piece, the significance of it within the artist or maker’s oeuvre, its standing within the larger art world, as well as the piece’s unique provenance,” says Vazirani. “Additional factors that play a role in determining value include who the artist is, the history of the particular work or the series it might be a part of, its size, medium, condition of the artwork, and even the year or period within which it was made.” 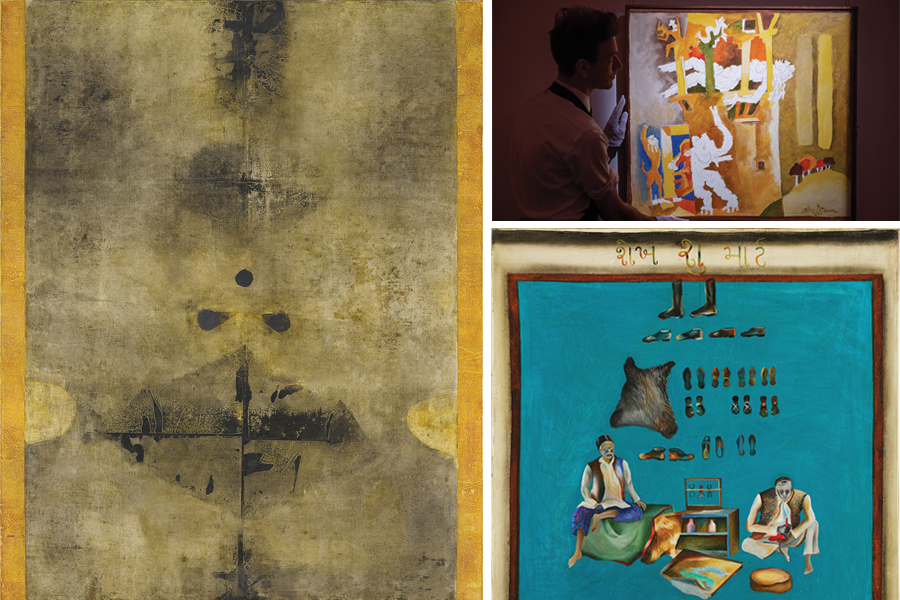 When the pandemic made the world go online, the art scene too became more accessible for those who were interested. The internet has changed the way buyers and sellers approach art in India. “It’s given people greater access to art across the world, allowed for more transparency, better and more competitive pricing, as well as helped in educating collectors by providing access to knowledge and tools for authentication,” says Vazirani.

While auction houses brought in new initiatives and digital innovations that have made auctions easier to navigate and participate in, collectors, too, seem to have easily taken to the new ways of bidding in auctions virtually.

“We found that our existing clients enjoyed our new business model and at the same time our enhanced offering of online auctions welcomed a wave of new clients, attracted by our livestreaming auctions and online bidding,” says Kanga of Sotheby’s. “This is of course as much true of bidders in India as it is of bidders anywhere else in the world. Since 2019, the value of bids placed by Indian clients online has increased fivefold,” she adds.

“Combined sales in our modern and contemporary South Asian art category reached $14.5 million last year, a figure 40 percent higher than the pre-sale high estimate, and up almost 30 percent on our equivalent totals in 2020,” says Kanga.

Taking innovation further, Sotheby’s, in partnership with Hefty Art, a Web 3.0 art space, will offer MF Husain’s Fury in a ‘phygital’ auction—a first-of-its-kind for an Indian artist’s work. Both the physical painting, created by Husain in 2000, and an NFT of the work, will be offered alongside the Modern and Contemporary South Asian Auction on October 25. The works, estimated at over $120,000, will be sold as a single lot online with cryptocurrency payments accepted, to coincide with the live auction at Sotheby’s London. “Sotheby’s is taking the long-term view and strongly believe in the future of NFTs and potential for blockchain technology in the art and collectables world,” says Kanga.

Check out our Festive offers upto Rs.1000/- off website prices on subscriptions + Gift card worth Rs 500/- from Eatbetterco.com. Click here to know more.

(This story appears in the 04 November, 2022 issue of Forbes India. To visit our Archives, click here.)